It’s about time that I posted about our Summer holiday to Rhodes. We actually got an amazing all-inclusive deal through On The Beach to stay at the Mitsis Village Beach Hotel & Spa in the small resort of Kiotari. I actually visited Rhodes when I was younger but it was Stefan’s first visit. I’ve been obsessed with re-visiting as I could remember Lindos was just a stunning place. Thankfully, it definitely didn’t disappoint. We also hired a car for our week in Rhodes as we really wanted to explore the island and see a lot more than just our all-inclusive resort (even though it was pretty amazing).

Whilst we were in Rhodes we used the Marco Polo Guide Books to figure out what the must-see places on the island were. Rhodes is a decent-sized island but it would only take about 90 minutes to drive from top to bottom. Our resort of Kiotari was quite far down on the right-hand side of the island and I’m not going to lie, there wasn’t too much going on outside of the hotels. Whilst our hotel had some amazing facilities and all-inclusive restaurants, it was nice to take a few day trips and explore the island more. I felt like we had the best of both worlds with exploring Rhodes yet enjoying the all-inclusive resort.

Our first destination on the island to visit was Lindos as I was so eager to explore the little whitewashed alleyways. However, we stopped off at St.Pauls Bay which is in the shadow of the Acropolis of Lindos. St.Pauls Bay is utterly stunning with clear blue waters and there’s even a teeny tiny chapel which is very popular for weddings. Honestly, this bay is well worth a visit for that picture postcard view. We had hoped to then go on to Lindos for an explore but our rental car broke down and we ended up stranded in St.Pauls Bay. Thankfully we got everything sorted!

The next day we visited Pefkos which was the next resort north of Kiotari. I kinda just wanted to visit as Pefkos is where we stayed when I was younger. As we visited just before the main Summer season was starting, a lot of bars and pubs were still under refurbishment. There wasn’t really a lot on so I feel like I can’t comment on whether it was worth visiting. There were some lovely little secluded beaches which if we had brought towels would have been a great place to just chill out.

We took two trips to Lindos, it really lived up to everything I remembered. It’s just a gorgeous little place with whitewashed alleyways which you can get lost in. So many lovely little restaurants, bars, shops and ice cream parlours. I was in my element. We decided to get the bus to and from Lindos on our first trip so we could enjoy a few drinks and stay late into the evening. There was a bus stop outside of our hotel and it was something like €2 for a 20-minute trip.

We used the Marco Polo Rhodes Guide a lot in Lindos, finding out where to eat and drink. The highlight of Lindos is the incredible Acropolis sitting high up on the cliffside. We did climb to the top which is where you’ll also see donkeys going up the path but decided not to go inside of the archaeology Site. One of the main things to do in Lindos is to visit a rooftop restaurant or bar. We decided to go to a place called Stefanys and we enjoyed the gorgeous sunset with amazing food and it was just lovely to see the views across the rooftops.

One of the bars which I noticed in the Marco Polo Guide was called the Captain’s House Bar which was just at the bottom of the path going up to the Acropolis. The bar is actually an original Captain’s House with a fascinating interior. We enjoyed a few G&T’s here, they actually had a local gin (Whitby Gin) which got us chatting to the owner. He was such a lovely guy and he was actually personally mentioned in the Marco Polo Guide which Stefan ended up reading out the excerpt to the whole bar. I’d 100% recommend this place, not only is it full of history, the service was so warm and friendly.

We did have another day exploring Lindos later in the trip where we mostly did a little bit of shopping. There are so many lovely little Souvenir shops. We also stopped off for some ice cream to enjoy on one of the rooftops. Lindos really is the gem of Rhodes, it’s an unmissable destination on a trip to the island. 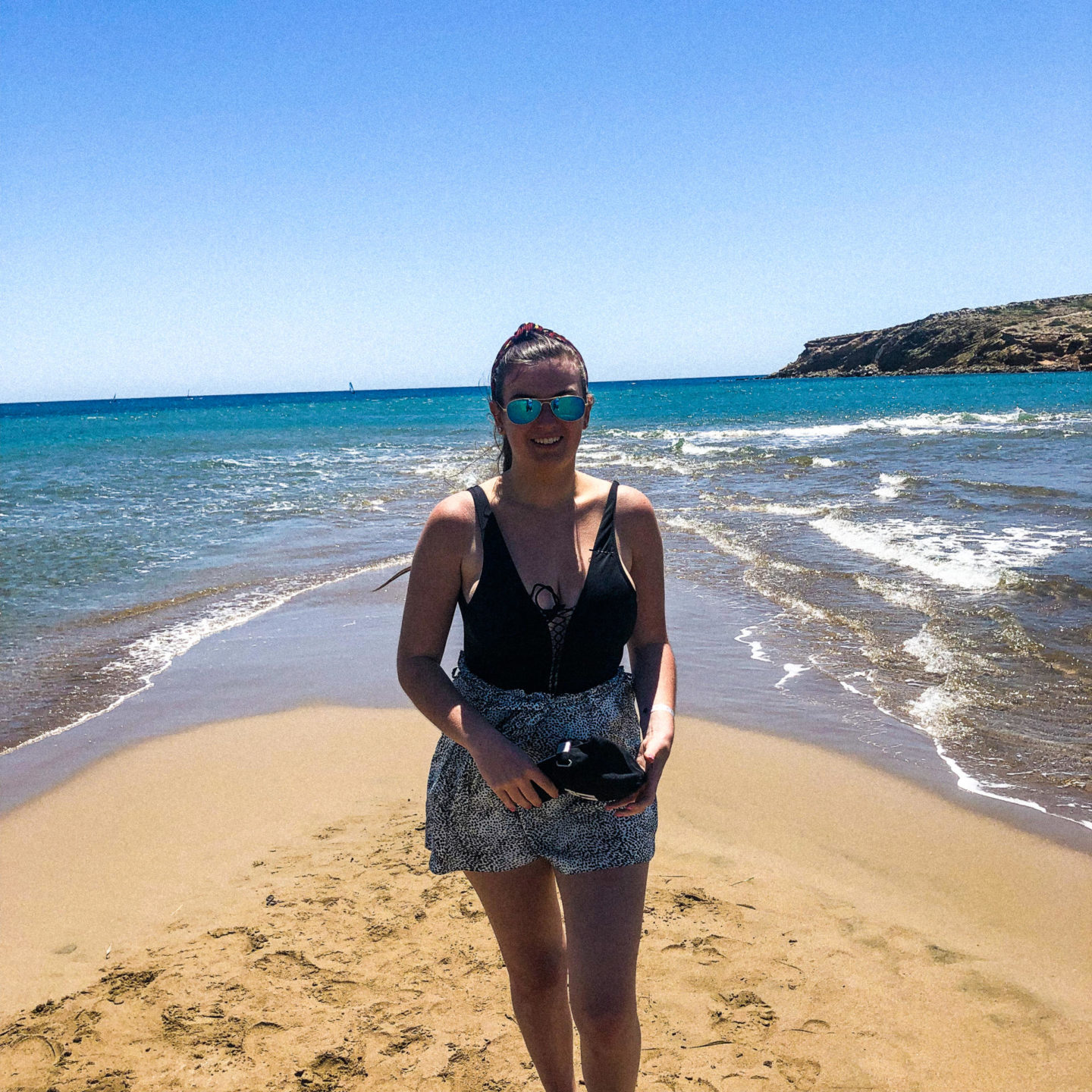 Prasonisi Beach is somewhere I wouldn’t have even thought about visiting until I read about it in the Marco Polo Guide. The beach is the most southern tip of the island and you actually pass through an army base en route to the beach. Driving down the windy road when the huge beach comes into view, it looks like an absolute windsurfers paradise. There are watersports going on in all sorts of directions but it’s certainly a hotspot for windsurfing. I didn’t even feel like I was in Rhodes, it all seemed very Californian. It was incredible to see it all happening, the downside for us was it was incredibly windy but I guess that’s perfect conditions for the surfers.

En route back to Kiotari, we stopped off at another of the guide books recommendations. Mojito was a very bright and vibrant beach bar with hammocks to laze about in and a private beach. We did only stop for a quick drink and ice cream as it was quite quiet, there wasn’t too much of an atmosphere.

Towards the end of the trip, we encountered a rainy day. Instead of being cooped up inside the hotel, we decided to take a little trip to Faliraki. I think it was about 40 minutes. Faliraki is more known for the lively nightlife and is where you’d stay in Rhodes for more of a group trip. I’m not going to lie, the main draw about going to Faliraki was that there was a McDonalds. Who else has to try foreign McDonald’s to see what’s different? Faliraki was your typical resort but I found it has some pretty decent shops and we ended up picking up a few bits.

On our final day, we headed to the capital of the island; Rhodes Town. The airport was about 10 minutes from Rhodes Town so it seemed easier to stop off here before our evening flight. Rhodes Town is somewhere I also remember visited when I was a child. It’s a place very much split by the old and new parts.

We parked the car by the harbour which we found this is the main place for free parking. The marina is pretty beautiful with the Windmills of Mandraki lining the harbour walls. In the distance, you’ll spot the huge cruise liners docked here for the day. We first headed towards the new town, mainly because I wanted to check out the holy grail store; Sephora. The new town was basically just lot’s of different stores. You’ll find your usual European stores such as H&M, Pull & Bear and there even was an M&S.

The Old Town of Rhodes is pretty spectacular. You’ll know you have entered the Old Town when you’ve passed through the medieval city walls. It’s all cobbled which did me no favours as I decided to wear flip flops – ouch! Rhodes Old Town actually is the oldest inhabited medieval city in Europe. It’s so beautiful but you’ll probably get lost through all the different (200+) streets and there were so many people. I can’t imagine how busy it gets during peak season as this was bordering on overcrowding. In the main square, there was so many different restaurants vying for your attention. Offering the cheapest beer or free Wi-Fi… Expect to be heckled from all directions. It’s utter mayhem. There is so much to see within the Old Town, it’s steeped in history. We probably could’ve explore a lot more but navigating the busy streets became quite confusing. We found some of the highlights of the Knights Quarter in the guide book. In the 14th century Knights occupied and transformed the area into the Old Medieval Town which still stands. Places such as the Street of the Knights play a key part in the history and has been preserved still to its original medieval exterior.

Looking back, I’m impressed with how much we managed to fit into a week in Rhodes. Although we did a lot of travelling around, we did take advantage of how amazing our hotel was. I’m going to be doing a full review of the Mitsis Village Beach Hotel & Spa because it was really lovely. We had such a lovely holiday and as I said, we found an incredible deal on On The Beach.  I think it was around £300pp so an absolute bargain! Rhodes is a gorgeous island and I’d 100% recommend if you are looking for a chilled beach holiday.

Have you ever been to Rhodes?

*This is a collaborative post with Marco Polo Guides.

Discovering Your Next Destination with TUI.co.uk

PREVIOUS POST
Personalise Your Beauty Gifts at Notino.co.uk
NEXT POST
My NFL London Experience at Wembley with National Express
2 comments so far.