I’ve lost count up to what day we are on with the USA Diary posts but we are now up to some very exciting adventures. I’d say this week was my favourite in my nine weeks in America. Visiting Monument Valley, the Grand Canyon, Route 66 and Las Vegas was up there on my bucket list. The drive from New Mexico through the Navajo Nation Reserve to Monument Valley was pretty surreal. So. much. desert. everywhere.

We arrived at Monument Valley Visitor Centre mid-afternoon and it was then we got a first look at the valley. It was a pretty mind-blowing view. We had all opted for the 4×4 Jeep Tour & Dinner excursion which took us into the Valley to get the prime money shots, explore the Navajo Reserve and learn all about the surroundings. Some of the areas we explored were only accessible on a 4×4 tour and the whole experience was a complete must do in my opinion. If you were feeling rather brave, you could even ride a horse on the spot made famous in John Wayne movies.

Included in our excursion was a Navajo Dinner and Dance. As it was quite a chilly night, we had to eat indoors which didn’t have the exact same effect but it was still an amazing experience.

The next day was a big one. One of my favourite movies is Forrest Gump and I think I may have requested to visit the place where he stops running about 1357 times.  It was crazy as I thought there would be a lot of tourists here doing the same thing. Maybe we were just there early but we managed to dodge the pretty infrequent traffic and get plenty of photos. Our tour guide, Chris, even dressed up as Forrest Gump which made the whole thing even better. 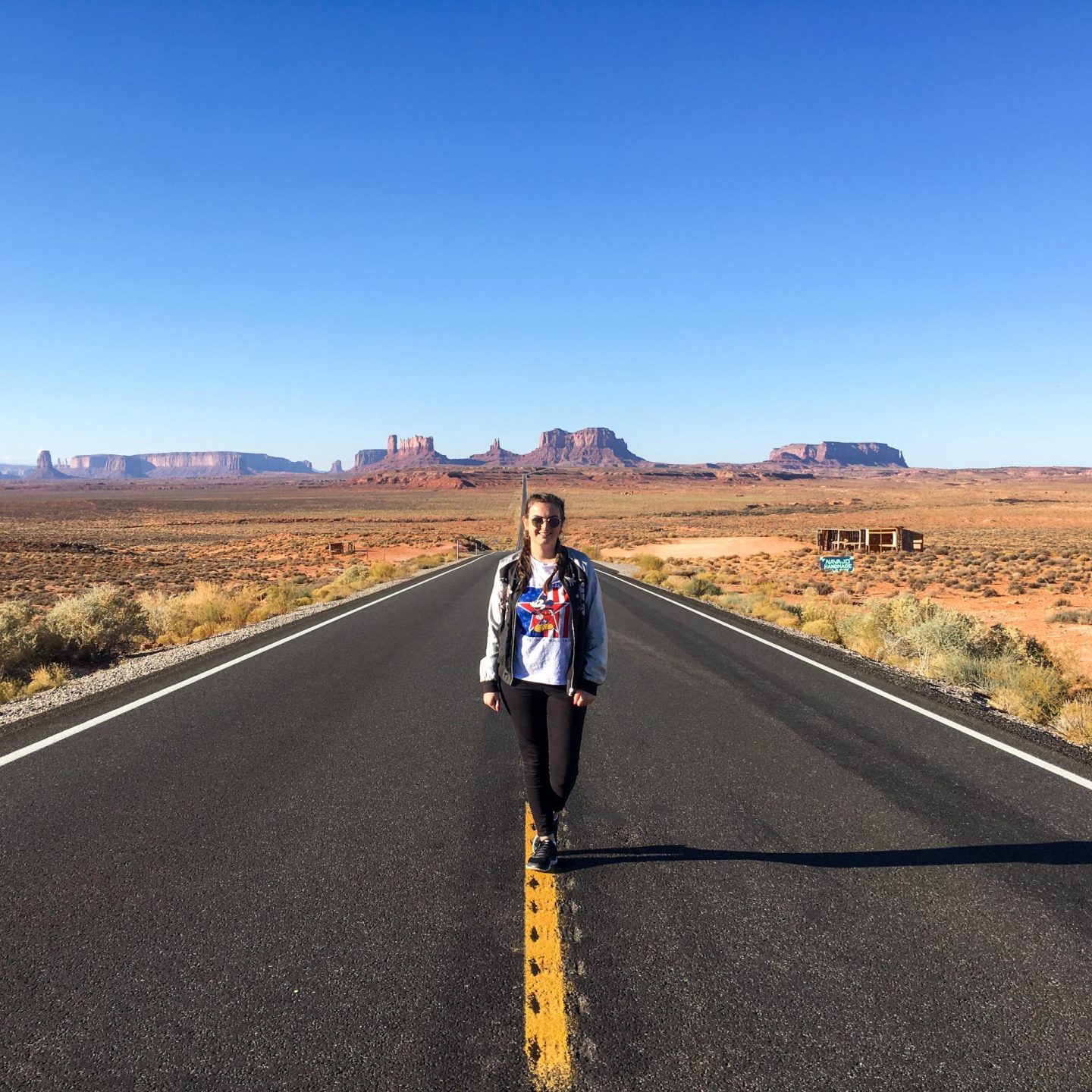 It was time to go from one incredible sight to another; The Grand Canyon. Similar to Monument Valley, nothing will prepare you for seeing these sights in person. The first glimpse of the Canyon from the car through the trees had us all in awe. We were actually staying in the Red Feather Lodge in Tusayan near the South Rim of the Grand Canyon. There are a few hotels, restaurants and even an IMAX theatre here making it a great base if you’re spending a few days in the Grand Canyon.

Not too far away is the Grand Canyon Airport which is where you can get your Helicopter Tours from. We decided to go with Maverick on the Canyon Spirit Tour, they were slightly more expensive at $299 but came highly recommended. I’ve never been in a helicopter before so this was something I was really keen to push myself to do but I was very nervous. After sorting out who was sitting where based on our weight it was our time to go up.

Although we had been teased with views over the Grand Canyon on our drive in, nothing prepared me for the full view as we zoomed over in the helicopter. We flew over the trees of the Kaibab Forest and all of a sudden the ground dropped below us and we were over the Canyon. I’ve got some really great footage of the Helicopter Ride which I’ll be eventually putting together in a USA Vlog. The views over the Grand Canyon and Colorado River were just mind-blowing. I’ll never get over just how big it all is. The Helicopter tour lasted around 45 minutes and that certainly was enough time. On the way back to the airport, I was feeling a little bit queasy and was fully regretting not taking some travel sickness tablets.

I’m not going to lie, it took quite a while to get adjusted to having our feet back on the ground. That evening, we headed over to the Grand Canyon Rim to see the sunset. I think it was Mathers Point we went to see the sunset, it’s just one of those spectacles you need to see. We also go up super early the next day to see the Sunrise over the canyon but due to low clouds and visibility, it didn’t really happen.

Everyone had decided to do the Bright Angel Trail which is an eight-hour hike down into the Canyon. Whilst I’m sure it would be an amazing experience, it just wasn’t for me. Also known as – I don’t think I’m fit enough! Alex and I decided to take a more laid-back approach and go for a snazzy breakfast at the El Tovar Hotel which overlooks the Grand Canyon.

Our plan for the day was to ride the rim on bicycles but after taking a trip to the Visitor Centre and enquiring about our idea we didn’t think it was such a good idea. There is actually a bicycle rental company in the Grand Canyon village but you actually can’t ride near the actual rim of the Canyon and would be limited to very narrow roads for most of the trail. So, in the end, we just decided to walk around the Grand Canyon South Rim Trail. This was a much better option for us as we got to take in all the views at our own pace. We also got to take our time with capturing a million and one photos. We also explored the Grand Canyon Village which has a huge gift shop, bank and post office.

I also can’t believe that I nearly forgot to write about the deer incident. The drama clearly follows me and after leaving breakfast. We were waiting for the little shuttle bus which transports visitors around different points of the South Rim. All of a sudden two deer come sprinting out of the trees and across the road, heading straight in our direction before separating around us only about a metre away. I kid you not, my life flashed before my eyes. The craziest thing about the whole situation was that they were actually being chased by a small Jack Russell. Madness.

These couple of days on Trek were certainly my favourite and rather exciting. Although we did book ourselves on some amazing excursions, the sights itself really were what blew me away. Monument Valley and the Grand Canyon are two places that you should visit in your lifetime.

Have you been to the Grand Canyon or Monument Valley?

One response to “Monument Valley & The Grand Canyon #8”