I’ve seen a few articles bobbing around the internet about Millennials now find one of the most important aspects of booking a holiday is the destinations “Instagramability”. Whilst it’s not my number one factor before booking a holiday, I don’t mind a pretty background. Disneyland Paris offers a magnitude of Instagram opportunities which I’ve shared many on my social media accounts. I’ve been really lucky to have visited the parks a few times over the past year as I bought an annual pass last Summer. I literally have thousands of photos from the Disneyland Park and Walt Disney Studios. Here are just 15 of my top Instagram worthy spots in Disneyland Paris.

Starting off the list with an obvious choice but you can’t visit Disneyland Paris without a shot of the infamous castle. Whether you’re capturing the castle by itself or during the nighttime spectacular, you are spoilt for choice on angles, poses and frames.

I’m not even going to discuss how many times we had to take this photo to get it spot on for Instagram.

Main Street USA is the magical hub of Disneyland Paris. There is always something exciting going on from character meets, the amazing parade to the big brass band playing Disney classics. Just the buildings along Main Street USA are worth capturing as the pastel shades and bold signs

For a truly extraordinary photo, stick around after the fireworks and be the only person on Main Street USA. I’ve only done this once on my 22nd Birthday last year and we just did a little bit of shopping and by the time we left everyone had gone. I would say don’t take the piss and loiter too long – They will turn the castle lights off!

Let’s be honest, the themeing of all the lands in Disneyland Paris are incredible and all offer some amazing photo opportunities. There’s something about Frontierland that I just love. The possibilities are endless but one of my favourite shots is of the Molly Brown Steamboat taken from the Big Thunder Mountain exit.

It’s the ride you all love to hate but the pastel design of the exterior of the ride and waterfalls provide the perfect Instagram shot. You can also get some great photos from inside the boat ride. Just try and make sure to crop as much of the ceiling out as possible as it kinda ruins it.

Another castle worth mentioning is the Alice in Wonderland one at the end of the maze in Fantasyland. I don’t think I’ve ever posted a photo on Instagram of the actual castle but the views over Fantasyland and the Sleeping Beauty Castle are worth posting about!

Disneyland Hotel is the amazing pink Hotel you will see on arrival to the Disneyland Park. It’s a dream of mine to stay there but it’s certainly on the pricey side. From all angles, this hotel is super Instagrammable and I’m a little guilty of uploading a fair few from my trips to the parks. If you’re visiting at Christmas pop into the hotel (entrance to the right), they have a giant gingerbread house in the lobby!

Following the theme of Instagramming anything that is pastel coloured and super pretty, you need to head over to the Mad Hatter’s Tea Party. I just love how aesthetically pleasing they have made the tea cups. If you’re lucky the Mad Hatter might even turn up with Alice and friends!

I always seem to get plenty of photos of the Pirate Ship in Adventureland and the first photo below was actually taken in December when it was -4 degrees. Can you believe it with that blue sky?! The best place to take photos of the ship is from the Adventure Isle Bridge.

Heading over to Walt Disney Studios now for some more Instagrammable spots. Toy Story Land makes a great backdrop for photos with so many incredible props dotted around. Even the simple lights hanging above the land make a great photo but there are some photo opportunities with T-REX, the RC Racer and the Parachutes.

For a split second, you might think you are in Hollywood. With the Hollywood sign behind you and palm trees everywhere. It would even be a great backdrop for a few outfit photos!

It doesn’t matter how many times I visit Disneyland Paris, I always snap a photo of the statue of Walt Disney and Mickey Mouse in the entrance of Walt Disney Studios. I love that they’ve got a statue to commemorate the two people that created all this magic.

If you get the right angle you can get the Hollywood Tower of Terror in the background.

Whether you are arriving, leaving or just going between parks grab a photo of the gates. You’ve actually got a few photo opportunities…

I usually snap a photo of this Disneyland Paris sign on the first day as we are arriving. This is just above the gates where you get your bags searched on arrival.

I love the detailing on the gates of Walt Disney Studios. It’s these small details that can make a great Instagram post.

I’ll hold my hands up and say that I’ve bought Mickey Mouse shaped snacks with the aim of Instagramming them. It’s hardly a chore buying delicious snacks to take photos of. There’s a great selection Mickey Mouse shaped items in the Bakery on Main Street USA. The chocolate shortbread is yummy!

If you’ve got a pair of Disney Ears on, flaunt them in your photos! The possibilities are endless but I’ve got to admit the photos I have in front of the castle are my favourite.

15. Grab a photo with the Main Mouse!

Finally, did you really go to Disneyland and not meet Mickey Mouse?! It’s got to be done! Meeting Mickey Mouse is a must-do on all my trips. Ques to meet Mickey are pretty long, he is in high demand after all! The best bet is probably Walt Disney Studios where he usually does a meet up at Toon Town.

I could probably include another ten Instagram worthy spot in the parks. What can I say, Disney is one magical yet pretty place! I’m also hoping to publish a few more posts about booking a Disneyland Paris holiday, what to do & visiting on a budget. Let me know if there is anything, in particular, you want to see from me. 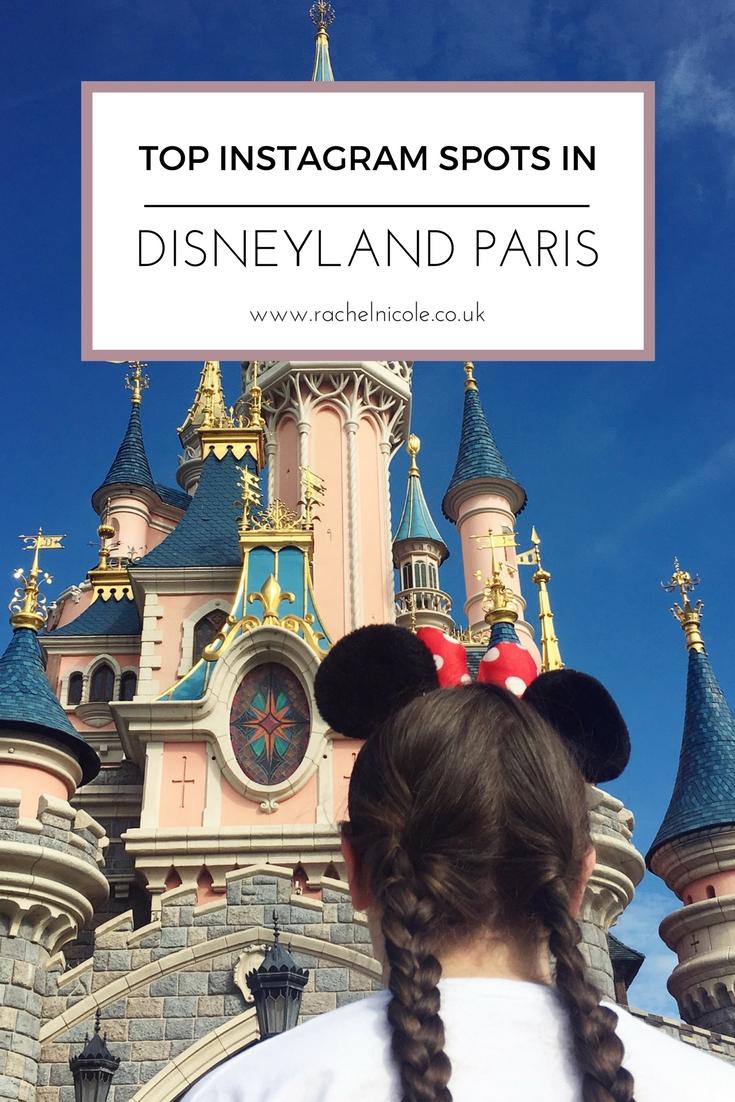